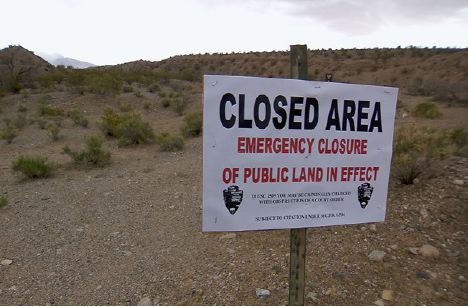 Back At The Ranch

Back At The Ranch
by Chuck Frank

Rancher Bundy stuck to his guns while the feds tried rounding up his
cattle on 600,000 BLM acres of Gold Butte, Nevada land which has been
worked by the family ever since the late 1800s, and then, the feds
took a back step and called off the Helicopter roundup. Some of the
eco-state-congressmen were worried about not getting reelected so
Obama dialed 911. Liberty, freedom, and land rights just had a
reprieve while victory crossed the Nevada desert, and for now, it’s
no longer Midnight at the Oasis.

Here’s the rest of the story. Many factors enter into the standoff
whether it be taxation without representation, water rights, solar
zones, grazing, sue happy eco-terrorists, “endangered species”, false
flags, bribes, billion dollar back room solar deals, or the feds war
on property rights and ranchers. Is it still the government’s job to
eliminate cattle in the plains just as they did the buffalo and then
relocate ranchers just as they did the native Americans? Clevin
Bundy is the last man standing who finally drew the line with the BLM
cattle rustlers who’s policies are over the top and meant to put
ranchers out of business. So where’s the beef?

Apart from the many factors present with BLM, let us not forget those
not so friendly, band of guerrilla insurgents from the Center For
Biological Diversity. They recently threatened to sue the government
if they didn’t protect the desert tortoise from Bundy’s cattle that
roamed the West. Is this why the BLM took action? These types of
lawsuits, once again, are used to force the Bureau of Land Management
to reduce grazing allotments throughout the Southwest, curtailing the
number of cattle in many areas by 80 percent or more. With the
exception of Bundy, 51 ranchers in Clark County Nevada were put out
of business. There is a giant communistic-tyrannical pattern in the
country which seeks to destroy ranching, logging, and property rights
utilizing armed federal agents, SWAT teams and snipers to accomplish
these outrageous un-American goals. The Bundy standoff was much like
Waco being revisited. But for now, all that
is left is for the feds to hire a PR agency and hope that their
terrorizing-range war image is laid to rest.

Meanwhile, back at the ranch, other facts come to the surface. BLM
information was reposted by the Free Republic titled, “Cattle
Trespass Impacts” which directly stated that Bundy’s trespassing
cattle would “impact” construction of “utility-scale solar power
generation facilities on public lands.” The BLM director Neil
Kornze, Harry Reid’s former senior adviser, had temporally purged
these documents from BLM’s website which stated that the agency
wanted Nevada rancher Cliven Bundy’s cattle off of the land which his
family had worked for over 140 years in order to make room for a 9000
acre, 5 billion dollar Chinese solar plant in Laughlin, Nevada which
has since been shelved. But then there is the sideshow. The person
who represented the Chinese solar company in 2011 was none other than
Nevada Senator, Harry Reid’s son, Rory Reid. Every day this is
becoming more and more like a movie script.

But here’s the very latest, straight out of another BLM play book
entitled Regional Mitigation Strategy for the Dry Lake Solar Energy
Zone (BLM Technical Note 444) which reveals that Bundy’s land in
question is within the “Dry Lake Solar Energy Zone and surrounding
area” which is part of a broad U.S. Department of Energy program for
“Solar Energy Development in Six Southwestern States” on land
“managed” by BLM.

But then, on March 21, 2014 signaled the first day of construction of
the Moapa Southern Paiute Solar Project on tribal land, where Sen.
Reid joined representatives from the Moapa Band of Paiutes,
executives from First Solar, Inc. and the Los Angeles Department of
Water and Power for a groundbreaking ceremony northeast of Las Vegas.
“ Coincidentally”, the location is about 35 miles from the Bundy
homestead in Bunkerville, Nevada, who’s cattle just might be roaming
around within the parameters of the 600,000 acre BLM site which is
the point of contention. What’s the worry? Would there not be
constructed a fence that would surround any amount of solar panels or
mirrors located inside of any such facility that will generate power
in the first place?

So all of the evidence is in and the recent actions taken against
Cliven Bundy and his family was under the guise of saving a “poor
desert tortoise” while a solar plant was being pieced together in the
back room.

This is just one more day in the life of a Nevada cowhand while one
more green, political fiasco takes place where roughly 84.5% of the
land is still in the hands of the feds. It’s time to take our lands
back before we the people lose them all. Clevin Bundy thank you for
standing your ground, and just as early Americans stood in the gap
while standing up to King George III during the American Revolution,
Bundy too is a true hero sounding the alarm and taking a just cause
to the streets of America. The red coats are still coming but this
time it’s not the British. It is a rogue group of traitors from our
own government along with other internal communist forces and foreign
factions who are intent on land grabs of monumental proportions.