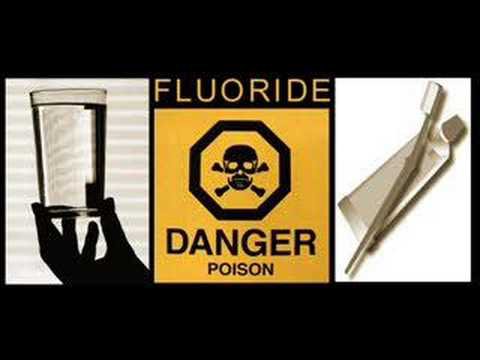 “I say this with all the earnestness and sincerity of a scientist who has spent nearly twenty years research into the chemistry, biochemistry, physiology and pathology of fluorine. Any person who drinks artificially fluoridated water for a period of one year or more will never again be the same person, mentally or physically."
Charles Elliot Perkins

Fluoride is all around us: It is in our tap water, most toothpastes and mouth rinses, added to infant formula and the main ingredient of many psychotropic medications. While the government and the ADA assure us that it is safe in the amounts we consume, we need to look closer at the effects it has on us as it builds up in our bodies. Fluoride can cause many health problems from fluorosis, cancer and arthritis to decreased mental functioning, apathy, and lethargy. This article will examine some of these health effects and some ways to neutralize and avoid them.

How Fluoride Affects the Body

Fluorine is a common mineral, but it is highly toxic in most forms. Fluoride compounds are waste products in the mining, fertilizer production, and smelting industries . It is sold as rat poison and used in pesticides. Fluoride toothpastes come with a warning label that it is dangerous if swallowed. The United States is one of 22 countries that have signed treaties promising not to dump fluoride compounds into oceans, lakes, or rivers due to concerns for contamination yet it is supposed to be safe enough to drink in our tap water. The fluoride compounds found in tap water have been linked to higher incidence of birth defects, lower IQ in children, cancer, immunosuppression, dental and skeletal fluorosis, and neurological problems. Fluoride accumulates in the pineal gland, which can lead to neurological problems. The fluorides can react with lead and pipe joints and also lead to higher concentration of lead in the water (1). Fluoride compounds originating from industrial wastes also contain other toxic elements like mercury, arsenic, lead, kerosene, and radioactive elements.
No human studies on the effects of fluoride consumption and exposure have been conducted in the US. However, fluoride exposure is increased in some parts of China and many studies on the effects of fluoride have been conducted there. In 2012 a meta-analysis study was conducted by the Harvard School of Public Health and China Medical University. It was published in Environmental Health Perspectives in the July 20, 2012 issue. The analysis showed that children in high-fluoride areas had lower IQ scores than children who lived in low-fluoride areas. Senior author and adjunct professor of environmental health at HSPH, Philippe Grandejan, has this to say (2):

“Fluoride seems to fit in with lead, mercury, and other poisons that cause chemical brain drain. The effect of each toxicant may seem small, but the combined damage on a population scale can be serious, especially because the brain power of the next generation is crucial to all of us.”

Fluorides can also wreak havoc on the thyroid gland, leading to hypothyroidism, especially when there is not enough iodine in the diet. Iodine deficiency is widespread so this applies for many. Prior to the 1970s doctors prescribed fluoride for hyperthyroidism in order to weaken the thyroid. It was effective even at 2 mg per day. Today most people consume between 2-10 mg per day from tap water, non-stick cookware, sodas, pharmaceuticals, and processed foods. Symptoms of hypothyroidism include mood swings, cold sensitivity, weight gain, depression, heavy or irregular menstrual periods, constipation, fatigue, dry skin, brittle hair, skin, and fingernails, and hair loss. There are ways to treat and cure hypothyroidism naturally, but it is important to remember that ingesting iodine orally, even in small amounts and special formulas, is toxic to the body and leads to lasting health problems and can even turn deadly. (3) For more on hypothyroidism and the dangers of ingesting iodine, refer to the HealthWyze article on hypothyroidism: http://healthwyze.org/index.php/component/content/article/211-how-to-cure-hypothyroidism-naturally.html

How Fluoride Affects the Mind

It is claimed that fluoride was used by the NAZIs to subdue their prisoners and make them apathetic. Charles Elliot Perkins was a researcher in chemistry, biochemistry, and physiology. He was in Germany after the end of World War II and put in charge of the Farben facilities. He was informed that the German General Staff had adopted the plan of using sodium fluoride to make their prisoners easier to control and weaken their will to resist. Perkins believed that fluoride affects the hippocampus to produce these effects. In 1987 Harley Rivers Dickinson, an Australian politician, talked about the dangers of fluoridation in "Address in Reply to the Governor's speech in Parliament." Here is an excerpt:
At the end of the Second World War, the United States Government sent Charles Eliot Perkins, a research worker in chemistry, biochemistry, physiology and pathology, to take charge of the vast Farben chemical plants in Germany. While there he was told of a scheme which had been worked out by them during the war and adopted by the German General Staff. This was to control the population in any given area through mass medication of drinking water. In this scheme sodium fluoride occupied a prominent place. Repeated doses of infinitesimal amounts of fluoride will in time reduce an individual's power to resist domination by slowly poisoning and narcotizing a certain area of the brain and will thus make him submissive to the will of those who wish to govern him. Both the Germans and the Russians added sodium fluoride to the drinking water of prisoners-of-war to make them stupid and docile (4).

Fluoride is in the municipal water supply of most major cities in the United States; 67% of the water supply in the United States is fluoridated. One of three types of fluoride additives is added to the water: fluorosilicate acid, sodium fluoride, or sodium fluorosilicate (5). It is difficult to avoid fluoride in the water if living in a major city that uses fluoridation. Common water filters sold at stores such as Brita and Pur do not remove fluoride. The different brands of bottled water sold at stores vary in quality, but often use deceptive marketing and are often not much better than tap water. Boiling water does not remove the fluoride. To be able to remove the fluoride completely often requires purchasing an (often expensive) filtration system like reverse osmosis, activated alumina defluoridation or distillation system.

From the other beverages, tea is quite high in fluoride because tea leaves have an affinity for it. Other products high in fluoride include soda, baby food, coffee (especially decaf), canned fish, canned grains, and processed and fast food. Anything cooked or prepared in fluoridated water, like vegetables or baby formula, will take up even more fluoride. People living close to industrial plants producing industrial fluoride (such as coal-fired power plants, aluminum smelters, phosphate fertilizer plants, plastics factories) are at higher risk for fluoride exposure and toxicity. (6)

Bone broth and other products that require separating meat from bone (like chicken nuggets) are also high in fluoride because it concentrates in bones. The only way to have bone broth with low or no fluoride is if the animals were raised with fluoride-free water, which is not very likely. Of course, most toothpastes now contain fluoride as do many medications from antibiotics to depression and anxiety medications. Despite its dangers, fluoride is not required to be listed on the label of any products. (7)

How to Cope with the Effects of Fluoride

For anyone concerned with the effects of fluoride, it is wise to eliminate as many fluoride sources as possible starting with fluoridated toothpaste and processed foods and sodas. Obtaining fluoride-free water is important but may be difficult. However, one can do a lot of good to their overall health by switching to a more natural and healthy diet.
There are also a few supplements that have been shown to counteract the effects of fluoride, at least on the brain. Curcumin, the active ingredient in turmeric has been found to attenuate neurotoxicity caused by fluoride. A study by Chhavi Sharma, Pooja Suhalka, Piyu Sukhwal, Neha Jaiswal, and Maheep Bhatnagar showed that neurotoxicity caused by fluoride in mice can be counteracted with curcumin (8). Curcumin is an Indian herb extracted from curry powder. It acts as a powerful antioxidant and anti-inflammatory. Another study with rats focused on the effects of selenium on fluoride neurotoxicity. It was conducted by Qian, Miao, Li, and Zhang. The study showed that selenium supplementation can antagonize the toxic effects of fluoride on the rat hippocampus (9).
As mentioned before, iodine can counteract the damaging effects of fluoride on the thyroid gland, but it has to be applied on the skin to avoid overdose and dangerous side effects. In that case iodine as sold in most pharmacies and used in first aid kits is used to paint a small patch somewhere on the body. There is an “iodine patch test” to determine if a person is deficient in iodine and the same method can be continued to supplement topically until the deficiency is corrected. For more on fluoride and iodine and the patch test, refer to the HealthWyze article on the subject quoted above (10).

We are told that fluoride is good for our teeth, even though there are many studies putting that into question. We don’t hear often about the damaging effects of fluoride on our body and mind, and definitely not from our dentists, doctors, or associations in charge of our health. It is up to people interested in maintaining their health and intelligence and those of their children to look for different sources of information and decide on the best course of action for their well-being.