…"Operation Medicine Delivery, was the culmination of planning efforts that began in February 2004, with a memorandum of agreement signed by the U.S. Secretary of Health and Human Services, the U.S. Secretary of Homeland Security and the Postmaster General. Parties to the 2004 MOA agreed to make USPS resources available for distributing emergency medicine in response to a bioterrorist attack." 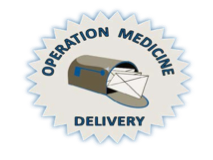 "The exercise scenario for Operation Medicine Delivery focused on a large hypothetical release of anthrax spores in the Minneapolis-St. Paul metropolitan area. In the scenario, the first evidence of a likely terrorist attack involving a biological agent was discovered on Friday, May 4. At 7:00 p.m., the agent was laboratory-confirmed as Bacillus anthracis. The amount of anthrax released was assumed to be sufficient to expose the entire population of the Minneapolis-St. Paul Metropolitan Statistical Area (MSA)."

"Exercise participants successfully delivered simulated supplies of antibiotics (empty pill bottles) to 33,076 residential mailing addresses in the four target ZIP codes (55101, 55102, 55411, 55422). The successful deliveries were made to 32,998 of the of the 34,672 addresses listed in USPS route guides for the target ZIP codes, plus 78 additional addresses identified in the course of the exercise."