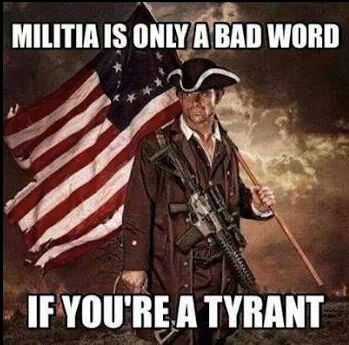 Real Americans Are Ready To Snap

Despite popular belief, every culture of every nation draws a line in the sand against government tyranny. The problem is, many draw this line so close to total defeat that it rarely matters. For the Jews of the Warsaw Ghetto, for instance, it wasn’t until the Germans had already herded millions onto railroad cars destined for death camps and cornered the rest into dilapidated central housing that the ZOB resistance was formed, only to be wiped out a month later. Perhaps hindsight is 20/20, but clearly too many freedom movements throughout history waited too long to respond to the trespasses of oligarchs.

The Founding Fathers frequently struggled with the proper measure of resistance. Many colonials wanted vengeance on the British after the Boston Massacre in March of 1770, but patriots knew that the timing was not right. The battle to rally citizens to the cause and to educate the masses as much as possible on the facts took precedence over the desire to enter conflict. The Founders endured five more years of British government criminality until nearly 80 farmers and militiamen stood outnumbered on Lexington Green on April 19th, 1775 to confront an army of 700 British regulars on a mission to capture rebel leaders and destroy weapons caches. No one knew at the time that the war would be sparked that day, but everyone knew that a fight was inevitable and near.

I believe the same feeling hangs in the air of modern America for REAL Americans, and by “real”, I mean those who actually support and defend the constitutional values and principles that lay at the foundation of our society. We sense that something is coming; a great change, or an unstoppable reckoning.
The question of when to strike back is pivotal to any resistance movement. Turn to violence too soon or without proper cause in the eyes of the public, and the rebellion may lose the moral high ground and the support of the populace. Wait too long, and the totalitarian hordes may be too far entrenched, forcing the rebellion to fight from a position of strategic weakness.

There are those who might argue that America crossed the “red line” long ago and now our society is simply rearranging the deck chairs on the Titanic while arguing over futile semantics. In certain respects, I can see their point. The U.S. political system is utterly lost. Anyone who still has faith in the Left/Right paradigm after two terms of George W. Bush and nearly two terms of Barack Obama is either insane, or mentally challenged. It should be obvious to Republicans and Democrats alike that our government does NOT represent the average man, and our election process is a sham. Democrats in particular should be equally furious and ashamed as the candidate they blindly worshiped to the point of cultism has now forsaken every value they thought he represented.

The legal apparatus of the U.S. is also beyond repair. Those in the mainstream who argue that grievances with government should be addressed by the courts instead of independent action obviously have not considered that the courts continuously uphold and defend legislation like that contained within the NDAA, which allows for rendition, torture, and even assassination of American citizens without trial or due process. And where are the prosecutions of Constitutional violations by the NSA? Why aren’t men like James Clapper in prison for lying directly to Congress. Why hasn’t Eric Holder been slapped in irons for his involvement with “Fast and Furious”? And what about the international financiers who back these politicians? How many of them have been prosecuted for their involvement in the toxic derivatives scandals that are destroying our economy to this day?

No, we lost the courts a long time ago. They will do nothing to save this country. But is the fight already over? I think not.

Nihilism is tempting for those people who are lazy and frightened and looking for a philosophical excuse to run away from making a stand. Claiming the fight is lost before it has truly begun is a longstanding tradition amongst millions upon millions of cowards through history. Every freedom fighter in every great revolution for liberty has heard the same arguments that we hear today – “It’s too late to change things. The enemy is too powerful and you will be crushed. The nail that sticks up will eventually be hammered down. Your movement is a minority on the fringe and no one will support you. None of you have the guts to really follow through…”

While there is certainly much to despair in the state of our nation, I find the notion that Americans will do nothing in response misplaced and ignorant. From what I have observed, it is not a question of “if” citizens snap, but when.

With objective eyes one could easily see it during the last attempts by the federal government to pass anti-gun legislation that would have led to confiscation. Pro-2nd Amendment protests erupted all over the country (though the MSM mostly ignored them) with participants far outnumbering the miniscule groups in support of gun control. The sentiment amongst millions of gun owners and millions of Liberty Movement proponents was that we were not going to allow government enforcement of new gun laws. Period. If that meant we had to start using those same guns to put an end to government, then that was exactly what we would do. The feds, of course, buckled.

Rather than take the more dangerous and unifying direct route of federal legislation, gun grabbers have shifted strategies, isolating and targeting specific states they believe will be more pliable and easier to conquer. Connecticut and parts of New York, however, have shown that even people in the most socialist of states have no intention of complying with gun registration or confiscation. In Connecticut, only 38,000 high capacity magazines were registered according to the new gun laws, while approximately 2.4 million purchased through retail remain unaccounted for. Only 50,000 “assault weapons” were registered, while at least 300,000 remain unaccounted for. A sizable number of police are also refusing to enforce registration measures (some out of constitutional loyalty, and some out of a desire for self preservation), causing the state of Connecticut to back off of its hard line rhetoric.

I can say with full confidence that the conditions within Connecticut alone would lead to an open shooting war if officials actually attempt to enforce registration and confiscation. If Safe Act-style legislation or executive orders are ever enforced at a national level, I have no doubt revolution would follow.

The latest hotbed I have witnessed is the Bureau of Land Management attack on a cattle farm in Clark County, Nevada owned by Cliven Bundy. The BLM has so far stolen over 500 cattle from Bundy on the grounds that the federal government owns the land his family has been using for grazing pasture for generations. The confiscation was implemented under the auspices of “protection for endangered species”. The species in this instance being a desert tortoise.

The methods used by the BLM resemble a militant raid, with hundreds of agents, helicopters, and even snipers at their disposal. Adding insult to injury and making the issue a national concern, the feds have also staged “First Amendment Zones” miles away from their activities to keep protestors out.

This may seem like a minor event, a tiff over cattle grazing or possibly property rights, but there is much more going on here.

Tyranny leaves lasting scars, and each tyrannical act results in an accumulation of wounds on the public psyche that do not heal. In the end, a single event can become a trigger to unleash a torrent of rage pent up in a population for years or decades. The fight for Cliven Bundy’s farm has the potential to become such a trigger.

So far, federal abuses have been primarily toward Bundy’s cattle, with confiscation ongoing and suspicions that a number of the cows are being killed. Here, protestors try to stop a truck from leaving the area which they believed might be carrying dead animals. Agents respond with dogs and tasers.

However, I believe that if this situation escalates into a Waco or Ruby Ridge brand of event, not only Liberty Movement residents of Nevada, but Liberty Movement champions across the nation will indeed finally throw down the gauntlet. What does that mean? It means they are going to start shooting. Opposing groups can debate whether this is a good thing or a bad thing, but the reality is that one way or another, it is going to happen.

Discussions within the movement are far from apathetic. Hundreds of thousands if not millions of eyes are watching every move of the BLM right now, and they should be taking this fact very seriously.

The naysayers will claim that we don’t have the will to take action. They are welcome to think whatever they like. But mark my words, Constitutionally minded Americans are not going to stand by and watch another massacre, nor a loss of gun rights, nor will we be entertaining violations of our freedoms for much longer. This society is on the edge of something. It’s kinetic, or electric. It is not yet quite visible but it is there, reverberating in the atmosphere. My suggestion to our federal bureaucracy would be to do what they did during the gun debate, and quickly back away.

Of course, we all know they won’t.

Do the elites want to stir up insurgency in order to give pretense for a larger crackdown? They very well might. But it is transparent in the way they try to mitigate dissent and offer placation that they do not want a rebellion larger than they can manage. I think it is far too late for that. I think they’ve pissed off too many people, instead of just enough people. I think that though most pretend-Americans will do nothing but watch in horror or hide in their hovels, the size of resistance to the tides of despotism is growing far beyond common realizations. And, when this resistance erupts, it will shock even those who fully expect it.